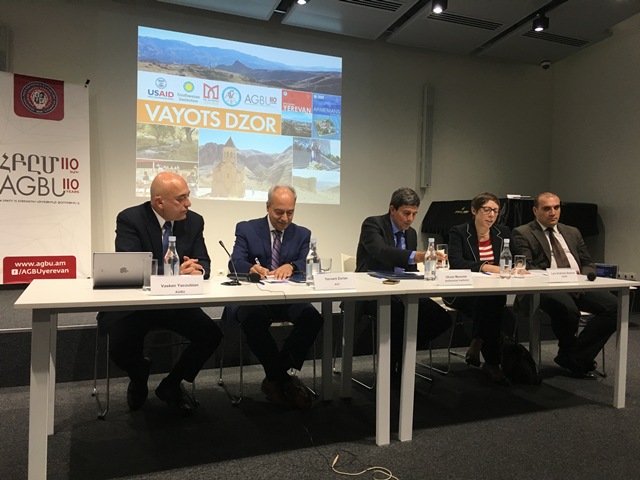 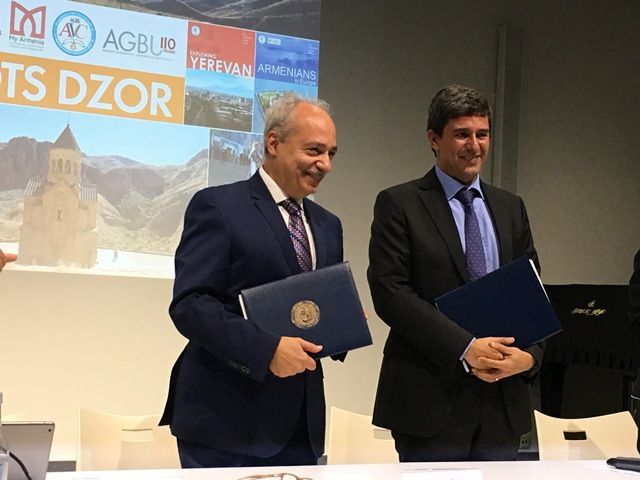 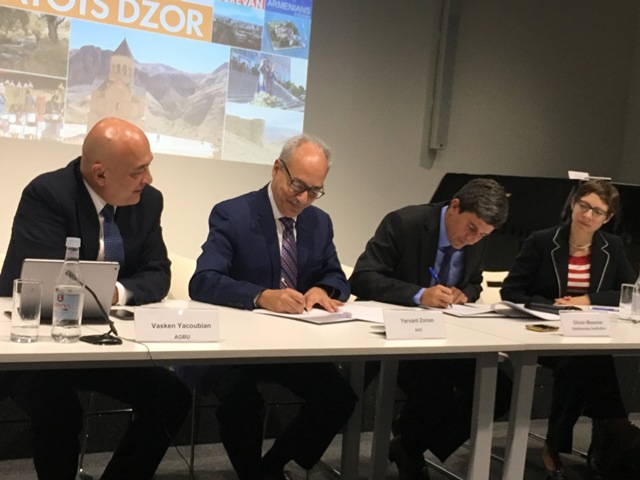 On October 21, the AGBU Armenian Virtual College (AVC) officially partnered with My ArmeniaвАФa program funded by USAID and implemented by the Smithsonian InstitutionвАФ to boost tourism and cultural preservation in the rural region of Vayots Dzor in Armenia. During the press conference, plans were announced to co-publish a multimedia e-book on the region as part of the AVC series.

вАЬTourism is one of the many dynamic developing sectors in Armenia. Committed to its mission of supporting ArmeniaвАЩs socio-economic progress, AGBU is actively engaged in the development and promotion of innovative products, such as e-books, to increase awareness and promote Armenia as a unique touristic destination attractive for people of all age groups and diverse interests,вАЭ said AGBU Armenia president and AGBU Central Board member Vasken Yacoubian.

The Vayots Dzor e-book will be part of AVCвАЩs multi-platform media product series accessible from smart phones, tablets and web browsers. The new e-book will cover the history and geography of the region of Vayots Dzor and will contain a range of information on local cuisine, architecture, archeology, festivals, regional events and adventure trips. Available in seven languages, subscriptions to the e-book series are entirely free. The first two in the series are The Armenian Highland and Exploring Yerevan. History of AGBU, the third e-book in the series, is set to be launched by the end of 2016.

вАЬThis project comes to add to the mission and continued efforts of the Armenian Virtual College in introducing the Armenian heritage to the global community,вАЭ said Dr. Yervant Zorian, AVC founder and AGBU Central Board member. вАЬSeeing the popularity of our multimedia e-book series, we believe e-publication is the best means to present the wealth of our heritage in a state-of-the-art manner. We are delighted that the Smithsonian Institution and USAID are also committed to further developing tourism in Armenia and are excited about this collaboration. The e-book on Vayots Dzor is going to be part of a series that will be covering various regions of Armenia.вАЭ

The Smithsonian Institution is the world largest museum and research complex in the United States attracting more than 30 million visitors per year. It also has an overseas presence in 130 countries promoting cultural resilience, conserving biodiversity, studying and supporting cultural and natural heritage. The Smithsonian My Armenia program aims to enhance and increase cultural heritage tourism in the regions outside of the capital city of Yerevan through a unique combination of research, scholarship, support for artisan craft, capacity building, and a strong focus on fresh thinking for tourism development. Smithsonian and Armenian researchers are working with local communities to identify and document their cultural expressions, including food, crafts, music, dance, and traditional knowledge. The information collected will then be used in the AGBU AVC e-book and other platforms to promote and share stories about ArmeniaвАЩs cultural, historic, and artistic riches with visitors from around the world.

вАЬThrough USAID and Smithsonian joint efforts, the My Armenia program will aim to demonstrate the productive relationship that can occur between culture and economic development. Enhanced and diversified cultural heritage tourism developed by experts and the efforts of My Armenia, in close cooperation with key partners such as AGBU AVC, can drive sustainable economic growth in rural communities and support them in improving the sustainability of Armenian cultural heritage,вАЭ said Olivier Messmer, chief-of-party of the Smithsonian My Armenia program.